What is Dupuytren’s disease?

Dupuytren’s disease is an abnormal thickening of the tissue just below the skin. This thickening occurs in the palm of the hand and may extend to the fingers. It may be accompanied by nodules, pits and cords of fibrous tissue that cause the fingers to become locked in flexion toward the palm.

The affected fingers cannot fully straighten, making it difficult to perform daily activities such as shaking hands, putting on gloves, washing, etc. Dupuytren’s contracture most frequently affects the last two fingers, and is more prevalent in men over 40 years of age.

To date, the cause of Dupuytren’s disease is unknown, but it may be related to certain biochemical factors in the affected tissues. There is no evidence that old injuries in the hands or intense manual labor trigger this pathology. 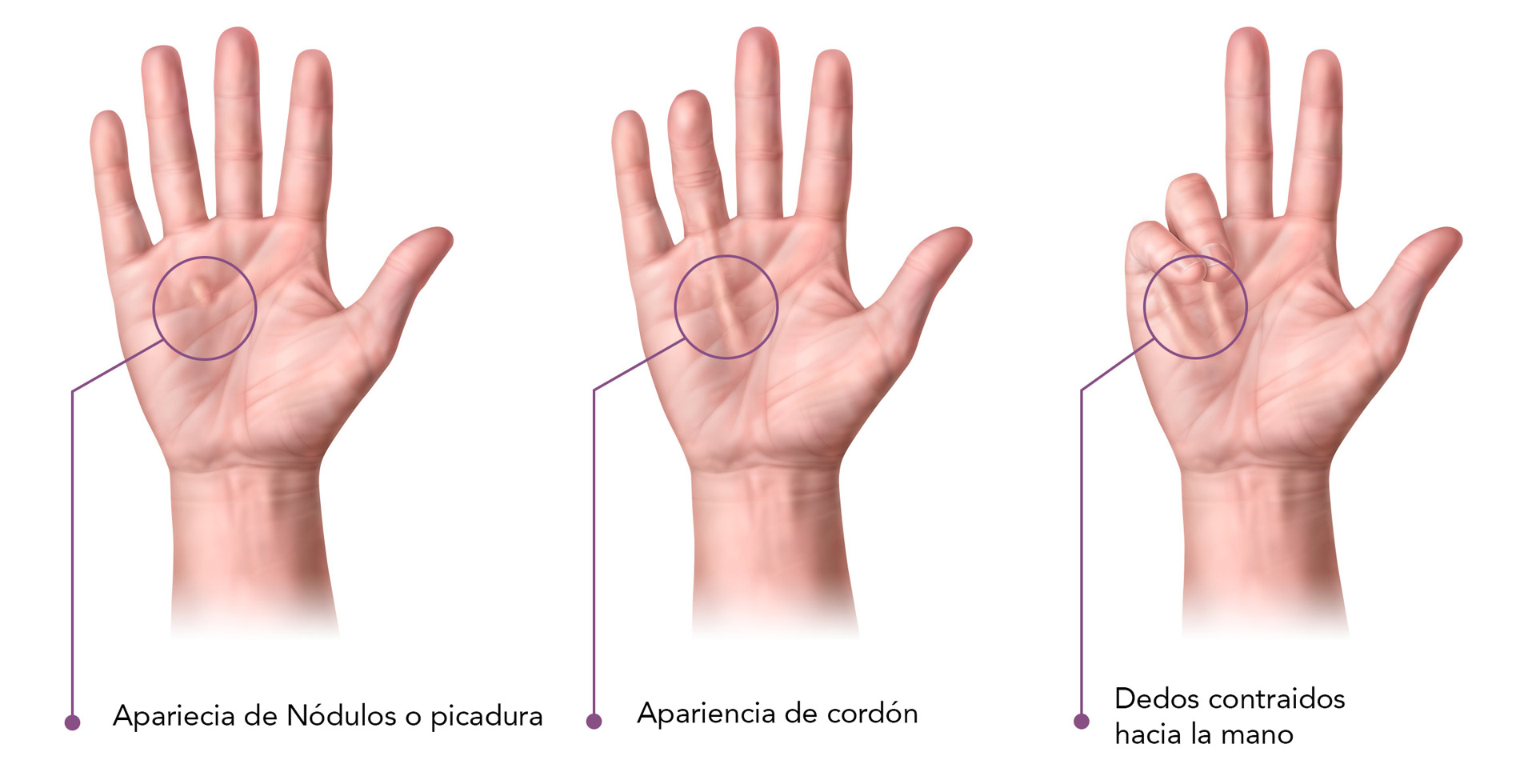 Symptoms of Dupuytren’s disease usually include lumps and dimples in the palm of the hand. The lumps are usually firm and attached to the skin. Thick cords may develop and extend from the palm into one or more fingers; the most commonly affected fingers are the ring and little fingers. Nevertheless, it is a painless pathology, except in some cases at the onset of the disease. It can appear bilaterally, although as a general rule, one hand will be affected more than the other.

For the diagnosis of the disease, an imaging test is not necessary, and visualization of the hand, looking for nodules and retracted fascial cords, would be sufficient.

Treatment for Dupuytren’s disease is complicated, as the cause is unknown, and will be developed with the aim of neutralizing the progression and slowing its progression. Treatment with manual therapy, radiofrequency and especially shock waves are very effective. In the most severe cases, where conservative treatment fails, surgery is considered. The use of adapted splints can be an appropriate complement to accompany the treatment.

What does the body’s regenerative capacity depend on?

The healing of an injury or physical pathology is the responsibility of our body, in which there are automatic mechanisms that are activated when we lose the normal physical or organic balance. These mechanisms are complex and depend largely on metabolism (biochemical, hormonal and neuronal processes). If these mechanisms work at 100%, we will be protected from a large number of impacts that our body may suffer at different levels (physical, emotional, biochemical and energetic) but if these mechanisms are diminished in their function, the ability of recovery and regeneration of our cells will be compromised, and may block the healing processes to an illness or injury temporarily or permanently. This will be very important to take into account when treating any injury or pathology, otherwise the patient will be able to perform multiple physical treatments on an injury without obtaining results.

How is the treatment planning?

The planning of this type of therapy is always personalized, giving priority in the early stages of treatment to reduce pain, inflammation and improve the mechanical and metabolic factors that have caused the injury. If we have to focus on the latter (because there is evidence of a deficit of function in the patient’s tissue regeneration mechanisms) then we will first set a guideline for the patient to perform at home for 3-6 weeks consistently:

Subsequently, we will start with the Advanced Physiotherapy and Functional Training plan.

Should I suspend professional or sporting activity?

It will depend on each case according to the degree of injury and physical condition of the patient.

How much time should pass between sessions?

It will depend on each case, the most common is to perform one to two sessions per week.

How many sessions do I need to start noticing improvement?

It depends on each case, but normally with the use of state-of-the-art therapies such as those applied in Corporis the improvement is felt from the first session. Between 5 and 12 sessions may be necessary for complete recovery.

WE HAVE RENEWED OUR COLLABORATION WITH MARBELLA CLIMBING CLUB