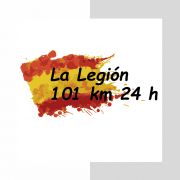 Everything is ready for the celebration of one of the most iconic races in the province of Malaga (and Andalusia) this weekend: ✔️The 101 Km Legión RONDA 2022✔️ organised by the Tercio Alejandro Farnesio IV of the Legion and for which Corporis has been preparing some of our athletes, such as our champion Sonia Téllez (who participated just a few days ago, coming third in the 1st Nordic Walk held in Marbella) and Pepi Franco Gallego, who have been preparing for this race under the physiotherapeutic supervision of Sabino and Wouter Brons under the supervision of Jorge.

🏃‍♂️🏃‍♀️The race, in which 9,000 participants from 25 different countries will compete and where more than 900 legionaries, 10 doctors, 11 nurses and more than 300 volunteers will collaborate, will be held from Saturday and in a period of 24 hours, from 11:45 am, in individual foot race and team walk, the athletes will have to complete the 101 km to reach the Alameda del Tajo, also in Ronda 🏞️. Those taking part in the individual MTB 🚴‍♀️ discipline have less time, as they will have 12 hours.

As a novelty, this year, the race can be followed by the local television Charry TV, the production company Zima Visuales and the Youtube channel of the speaker of the race, Pedro Guerrero Chito, so we won’t miss it!

It is undoubtedly one of the most eagerly awaited races in the area and one that we at Corporis have been focusing our attention on in the weeks leading up to it, preparing some of the competitors. To the 101 km Ronda organisers, Sonia, Pepi, Wouter and all the others who will give their all….

Photos of the I Nordic Walk held in Marbella

MARBELLA HOSTS THE IRONMAN 70.3 THIS COMING WEEKEND
Scroll to top